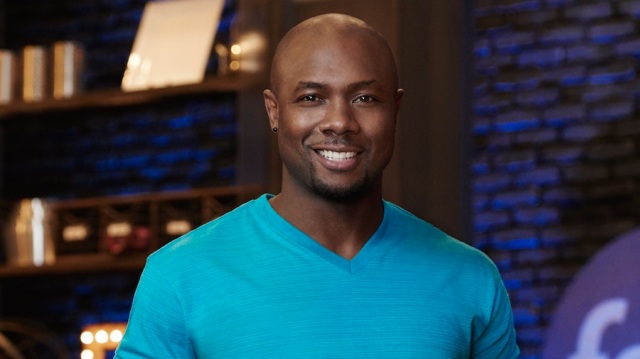 Eddie Jackson is an NFL player who is not only famous for what he achieved on the gridiron but also his latest accomplishments on the BBQ grill. This summer, Jackson won the Food Network show Food Stars and is the current host of BBQ Blitz on that same network. Jackson is personable and easy to get along with. He treats each fan with a kindness proving the warmth he shows on TV is no illusion. Comfortable and easy going, his impressive work ethic includes playing for four NFL teams before hanging up his football cleets in 2008. His career included stints at the Carolina Pathers, Miami Dolphins, New England Patriots and Washington Redskins. Read our Q&A and get to know Eddie Jackson.

Q: You traveled from Houston to take part in this event what does it mean for you to participate in the New York Food and Wine Festival?

A: It is an amazing event at the Food and Wine Festival and giving back to the Food Bank of New York City. This festival has over the years raised over 8.5 million dollars to help people in need of food. This was a great opportunity to give back and to have a good time and serve so of my great food.

Q: You probably had the best seafood dish out here. Grilled shrimp, on tostones with avocado cream. Why did you serve this dish here in New York?

A: This is the first seafood dish I made on Food Network Stars and it is also one of the bestselling dishes I serve on my food truck, Carribean Grill back in Houston, Texas. It is very popular there and I knew it would be a big hit in New York.

Q: You spent several years in the NFL. Who are you picking to win the Super Bowl this season?

A: I played for the Patriots, I’m a Patriots fan. I know I am surrounded by Jets fans at the Ultimate Tailgate event in New York but, let me be honest. I think though, when you consider the league right now, Tom Brady and the Patriots are going to win it all again.

Q: You last were in the NFL in 2008. Since then, there have been a number of changes. Most notably the rule moving extra points attempts to the 35 yard line. What do you think of the changes?

A: Yeah, I think anytime you make the game a little more difficult and challenging, I think that is a good thing for the NFL. I feel the guys these days are getting bigger and faster and stronger than ever and more challenging and good for NFL and fans. I think that also applies to the new extra point conversion attempt rules.

Q: The big controversy right now involving professional football is concussions. What is your take on concussions crisis as a former player?

A: I think the concussion it’s a brutal sport and the NFL is going in the right direction. Look, the guys are getting bigger, fast and stronger and I do think the NFL is on the right path with where they are going. At the end of the day, that’s their investment and protecting the players is so important and they are on the right track.

Q:  What’s the best place in Houston that you would recommend to our readers?

A: Well I would have to say my house ! (laughs). Houston is known as a barbeque destination and I think one of the new joints in town Gatlin’s. (Eds: Gatlin’s is also  two-time winner of the Houston Press Best Barbecue award)

Q: What are some of the projects you are currently working on besides your new TV show “BBQ Blitz” on Food Network?

A:  I am working on a number of things involving both food and fitness. I have a lot of plans for my work on the Food Network. I mean personally I love to cook but, that is just one part of good living. It is also just one point of what I am involved in. I have a gym in Houston where I’m a personal trainer and I am developing that as well.

Joseph Hammond is a freelance journalist who has been published in California, Estonia, Egypt, and Jordan. He enjoys learning languages and is pretty good at table football. He’s a big fan of boxing, the Los Angeles Dodgers, and FC Barçelona.