Instead of walking through lifeless sculptures at a museum last Friday, I attended day 2 of Concept LA Fashion Week at the Ace Gallery, where gorgeous fashion models posed as sculptures and runway shows took place.

The 5 installations were held down the hallway, which appeared to be a hang out station for Concept LA’s fashion-forward guests. When I sat down against the wall for a bit to rest my legs, I was essentially shoe shopping for high-heels. It was interesting to witness the countless amount of business card exchanges between trendy individuals and street-style bloggers snapping photos of guests. 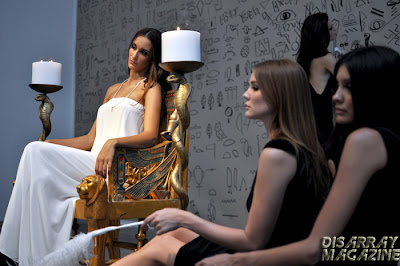 Mike Vensel’s installation made me feel as if I stepped into an Egyptian queendom. His “queen” model–initially dressed in a blue gown with bell sleeves and later changed into a sleeveless white one–was sitting on a golden chair between two candle holders with cobra snakes wrapped at the necks. Two of the models were gracefully sitting on pods with their legs brushed to the side. One was fanning the “queen” model with a large white feather, and the other was drawing hieroglyphics on the back wall. All in all, Vensel stayed true to his sophisticated, monochromatic pieces this season.

The model (and only model) in Laiaison’s exhibition sat with her back bent backwards and retained a daunting, yet beautiful expression. She was styled in a short, black long sleeve dress with a deep V, revealing her chest, and wore a pair of mary jane stilettos. I felt pity for the model, considering she had to hold this position in the heat, for the Ace Gallery lacked air conditioning. Nevertheless, she looked fierce!

ISM Mode had a playful approach compared to the other installations, as there were color blocking, stripes, and blotches involved. There were interesting head pieces, one of the most memorable being a large t-bone with tulle scrunched behind it. The checkered floor enhanced color blocking, which is–I’m guessing–the style that the designer wanted to emphasize.

Instead of having models acting as mannequins, Michelle Laine literally did the opposite. I’m not sure why she chose the model-less route, but the pieces weren’t too bad. Laine managed to keep her styles edgy and feminine at the same time. She paired dark, slashed leather with lace outerwear, which keeps the ensembles soft and flirty.

Valerj Pobega’s installation was dark and eerie, with stacks of broken televisions in the middle. To the left, the models were styled in white, chiffon dresses, and to the right, it appeared as if there was a group of cool goth-esque kids dressed in black parachute pants.

It was certainly a breast-affair at the Bohemian Society’s runway show, specifically with its Boho pieces. A model revealed her bare breasts while wearing a small, glittery shawl that barely covered her chest, and another was styled in a vest that only covered her sides. There were some navajo pieces, particularly on menswear, and some lace. The highlight of the show was the last dress: It resembled a parachute, but appeared to be weightless and was beautifully designed, with a deep V and an opening in the middle of the skirt.

There were lots of X’s in Jen Awad’s runway show–literally. They were ironically placed on sophisticated jackets and skirts, which were either in bright colors or styled with bright pieces. There were also some transparent colored raincoats this season in preparation for April showers. For this line, I’d have to say that the dresses with geometric cut-outs were a win in my book.

The Concept LA closing party on Sunday was at Sirens Studio, where designer panels were held and complimentary cocktails were provided, courtesy of Pink Pigeon Rum. I was escorted by a woman wearing all black leather and glittery Lita’s when I arrived, leading me to the top floor. The models, followed by a crowd of hasty photographers, came out dressed in pieces by some of Concept’s designers later that evening.

Concept LA Fashion Week (or should I say weekend?) projected well. It produced a unique mixture of art and fashion, which retained a creative aura–and most importantly, shoe eye candy, which compensated for the heat.