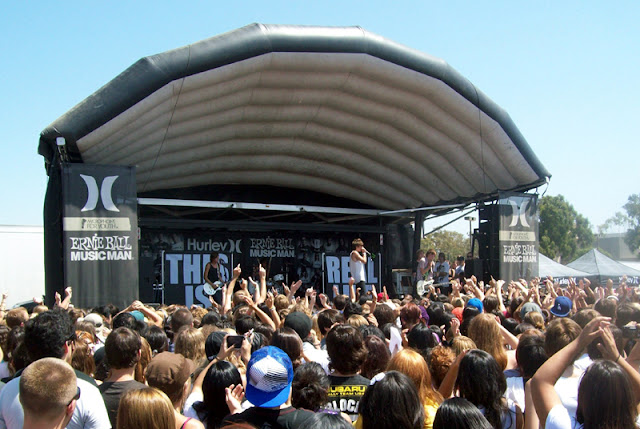 Thousands of teenagers flocked to the Vans Warped Tour at the Home Depot Center, which featured over 4 stages and more than 15 bands. One of the common themes at the event (besides teens wearing all black clothing and Chuck Taylors) was crowd surfing and moshing to fast, loud music.

On the Hurley Stage, Arizona natives The Maine, covered Def Leopard’s 80’s hit titled, “Pour Some Sugar on Me.” Lead singer John O’Callaghan told the audience to take two steps forward and dance with the person in front of them. Freaky deaky, if you ask me. Anyway, the rowdy crowd sang along to almost every song and obliged whenever Callaghan told them to put their hands in the air and dance. What made this band so entertaining to watch? The answer: Catchy songs, great vocals and an energetic stage presence. Offering good advice, Callaghan asked the crowd if they were still on vacation and told them to “stay in school.”

Over on the main stage, Underoath performed a string of songs to a huge crowd and mentioned being a Christian band. Lead singer Spencer Chamberlain admitted that the band was probably not the typical band on the Warped Tour bill but urged the audience to be open minded.

Another memorable performance was by Black Tide, a band that really knows how to get a crowd amped up. Performing near a dirt field, the band combined loud wailing guitars, hair flipping with overtly animated band members. Audience members created a sickening dust bowl as they rushed to the stage as soon as they heard the band playing.

After Black Tide’s set, the band threw drum sticks and guitar picks into the audience.

Next up on the Hurley stage was TAT, a band hailing from the UK fronted by Tatiana DeMaria. With fast paced beats and DeMaria’s fast singing, the band drew a huge crowd. They delivered a variety of sounds including punk, metal, ska and melodic music with lots of heart. This band is honestly one of the most original ones out there today.

Over at the Ernie Ball stage, Nylon Pink performed to a small audience. It seemed like this stage was reserved for the lesser known bands. Nylon Pink band members consisted of three Asian females and a male drummer. The music was a bit sloppy with messy guitar solos and vocals that didn’t quit hit the right notes. Luckily, not everything about this band was horrible, at least they looked good and were interesting to watch.

But wait, there’s more. While walking around the venue, there was definitely no shortage of merchandise as booths were selling everything from hats to purses, neon T-shirts to bikinis, and booty shorts to CDs. Concertgoers even got a lesson in safe sex as they entered a giant yellow Trojan Condom tent for a chance to win prizes, leaving with free condoms.

Despite the fact that Warped Tour veterans Bad Religion, Guttermouth and Bouncing Souls did not take the stage at this event, the show was fun and fans came out in the masses to stand in the sweltering heat, mosh in a dirt bowl and crowd surf on the last day of the tour. Oh and let’s not forget to mention the size of the tiny vert ramp. I remember the vert ramp being huge back in 1998 but the downgrade this year was insignificant.

Without a doubt, the bands on the bill were entertaining to watch and the event was worth going home with a sunburn.