Filmmakers Spotlight: Ali Scher of "The Maiden and The Princess" 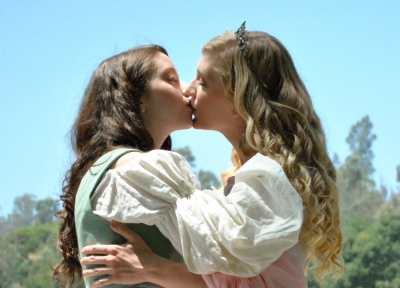 When it comes to pushing the envelope, Director and Co-Writer Ali Scher just does that. In her latest project, The Maiden and The Princess, Scher tackles homosexuality in a fresh and innovative way. Learn about her film, the lessons she’s learned and check out her advice for up and coming filmmakers.

Tell us a little bit about your project and how long you’ve been working on it.
My short film, The Maiden and The Princess, is about Little Emmy Adams [who] kisses a girl on the playground and is left feeling isolated and alone. The Grand High Council of Fairy Tale Rules and Standards led by Bernard (Julian Sands) sends her a hetero-normative fairytale to set her down the ‘right’ path in life. With the help of fairy godmother and rogue fairytale narrator, Hammond (David Anders), Emmy searches for herself amidst this musical fairytale.
The Maiden and The Princess is a fairy tale about a little girl who needs to learn to love herself. I made this film for every little girl and boy out there that feels different without understanding why. There were no books or films with people like me in them when I was growing up. There was a Disney princess for every color of hair and every country, but no princess ever had a girlfriend. My goal with this project is to cut through the silence and facilitate honest communication between children and parents about sexual orientation. As a kid, I was afraid that by talking about my feelings, I would lose the people in my life I loved. I made this film so no kid has to feel ashamed of who they are. We as a society need to encourage individuality in children, even if it means exposing them to things we are afraid of.
Is there anyone you’d like to thank for helping out with this film?
I’d like to thank my genius cast and crew, as this project really was a fantastic collaboration! Specifically, I have to thank my wonderful producers, Ian Ward and Rebecca Louisel, along with my fantastic leads, David Anders, Julian Sands, Tallulah Wayman-Harris and Megan Hilty. I also need to thank my beautiful, perfect girlfriend, Olivia Choate, for inspiring me in both my life and my art.
How does it feel to have your film part of the New Film Makers Screening at Sunset Gower Studios?
It feels AMAZING to have my film be a part of the New Film Makers Screening at Sunset Gower Studios! I’ve heard such incredible things about this screening series, mostly from fellow USC graduates, and I’m beyond honored to take part!
What inspires you?
I’m most inspired by a really good story and dynamic, original characters.
Who are your influences and who do you admire?
Growing up, I used to always keep my gigantic anthology of Hans Christian Anderson fairytales on my bedside table. My mom or dad would read me two a night. Those stories shaped my childhood dreams and definitely still inspire me today. 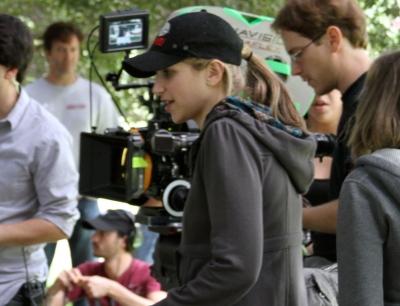 What lessons have you learned from the industry so far?
I’ve grown up a ton since becoming a filmmaker. Making a movie is like having a baby. It poops and pukes and sometimes just cries and smells… but you love it anyway because it’s yours. Taking care of a film, ushering it into being, takes an enormous amount of discipline and drive. Filmmaking has turned me into an adult, but left me with the excitement and effervescence of being a kid. It’s the best of both worlds (and yes, I did just quote Hannah Montana, sue me).
If you could collaborate with anybody, who would it be?
I’d really love to work with Tina Fey someday. She’s such an intelligent and talented female writer/actress. I have a lot of respect for that woman.
What is the toughest experience you’ve ever had to overcome?
Casting the lead part in Maiden was an enormous challenge. Finding a little girl with a believable British accent in L.A. is no easy feat! I joined an online expatriate meet-up group and attended their meetings at local pubs. Once I was on their mailing list, I started sending out inquiries about kids who might have recently moved here from the UK with an interest in casting. I’d also include updates about how the rest of the cast was coming together. It definitely helped that our amazing Casting Director Tammara Billik got us the incredible David Anders and the incomparable Julian Sands. We actually got a few replies from those email inquiries and that was how we wound up casting Tallulah, our little star.
What is the best piece of advice someone has given to you?
Amanda Pope, one of my mentors from USC always told me to never ask for permission. Just do it (whatever it is) and ask for forgiveness later!
What advice would you give to new filmmakers starting out in the industry?
Have a voice! Know what you want to say, and say it in a distinct way. Pussy footing around won’t get you anywhere. No one will care until you take that camera and MAKE them care.
Where can we expect to see you next?
We’re nearing the end of our first year on the circuit and have played at over 50 film festivals (both in the US and abroad). The film has won quite a few awards, including a Student Emmy, the 2011 DGA Jury Award for Best Female Director, and the 2012 USC Faculty Award for Best Director. I’m working to adapt a really exciting book (set in 13th century Italy) into a screenplay with my writing partner from Maiden, Joe Swanson. And I’m also co-creator of a webseries called Candyland (link provided bellow).
Let our readers know where they can find more information about you and your projects.
Here’s Maiden’s official website: www.maidenandprincess.com
Maiden’s facebook page: http://www.facebook.com/pages/The-Maiden-and-The-Princess/202801736419385
And here’s a link to the promo for Candyland, the webseries: http://www.kickstarter.com/projects/1396193475/candyland
Anything else you’d like to add?
I’ve always wanted to be a storyteller. I love theater and literature, but film provides a much larger canvas to paint on.
I’d worked in theater since I was really little, and love directing for the stage. I just hated that feeling after a show ends… like a part of you is dead and gone forever. With film nothing ever dies. That’s a big part of what I love about it.
Want more info?
Visit the NewFilmmakers LA Official Website at www.NFMLA.org for more information.
About the Author

Formerly an editor at Demand Media, writer at Citysearch, The Examiner, LA Youth Newspaper and proofreader at The Los Angeles Daily News, Christy Buena decided to start Disarray Magazine because she missed writing what she wanted. From hiring writers, to contacting publicists and making assignments, Christy is responsible for the editorial strategy of Disarray Magazine. Get to know the team of talented contributors.
Questions, comments or suggestions?
Contact Christy@disarraymagazine.com
Follow Twitter.com/ChristyBuena