E3 isn’t over yet, but it is for me. Two days in the mobs of the convention center left me wanting a shower and the relatively rural life of Santa Paula. You can keep your traffic jams LA, nobody wants them. The expo was such a visceral assault on the senses that the easy listening music and thin crowds at the Facebook E3 after-party seemed like another planet, not the next block. But as with any good E3 wrap-up article, we have to declare some winners and losers via some arbitrary system few know and even fewer understand.

Here is our winners and losers list from E3.

Winner for biggest damned screen goes to:
Activision
Never in my life have I seen a longer display than the Activision booth. People just gathered around the 140 foot wide display to watch screenshots and videos dance across the screen as people shot photos and videos, and even applauded after Black Ops II trailers. It was definitely something to see. It was so big, we had to take three photos just to get the damned thing in to “one shot.” Seriously, Activision, this was the best you had? Go bigger next year. Whole city blocks, maybe.

Winner for the worst way to earn a T-shirt:
Borderlands 2
The line for Borderlands 2 at their official booth was over two hours, and all you got was a T-shirt and 20 minutes of play time. There is better payoff at a Disneyland ride and at least you get a photo taken of you. Photography was expressly forbidden at the booth.

Winner for most sought after swag:
Oswald Ears
This little set of Oswald ears with your name stitched in them were all the rage, and the line for these was nearly as long as that for Borderlands 2. Everyone wore these deformed Mickey Mouse ears all day long. Epic Mickey 2 swag was all the rage, thanks to a Disneyland tradition formed to fit E3 and then launch their next title.

Winner for best gaming booth prop:
Aliens: Colonial Marines
They had a real prop from the 1986 film. It is the queen mother alien Ripley fights near the end of the film. Thing was so damned cool, and big. It didn’t hurt that the lighting was that disturbing blue and the set also came equipped with colonial marines to pose with and a replica loader you could pose in for pictures. Best set. Damn fine game, too. 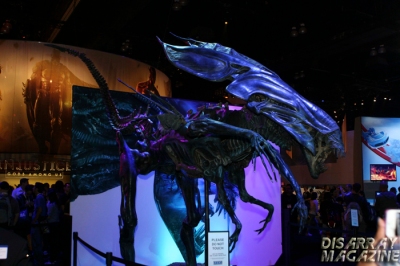 Honorable mention for best booth prop:
Borderlands 2
The ten foot tall statue of the main characters from the game was all you could see when you walked in through the door to the hall. It was front and center and was colossal. They deserve a shout out, but for a booth that frowned on photography, they had a pretty big reason for people to pose and take photos right near the gameplay. A little counter productive. 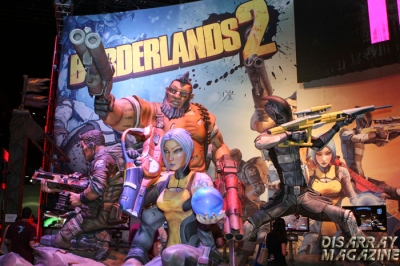 Winner for best booth babes:
Forza Horizon
We don’t have photos, I was too busy drooling, but these girls were hot and dressed inappropriately…in a good way. Sex sells, Gwen. Sex sells.

Most awkward silent treatment:
EA and Activision
Given their most recent legal scrappings, you’d think that we’d want to keep them apart. Alas, you could throw a rock from Activision and hit the back of the EA booth, I even heard rumor someone did (letter wrapped around the stone said, “you suck”) There were to different wings for this event, could have separated them and saved everyone some discomfort, but they could not have been much closer. Awkwaaaarrrrddd…

Most improved street cred:
WiiU
I know, you have your reservations. So do I, but I got my hands on this thing and saw some interesting uses for the second screen and got to feel the pad in my hand. Not as terribly difficult to use as one would think. The redesigned controls will be easy to get used to for traditional gamers. If the U pad isn’t your speed then there will always be the “pro” controller and the classic motion control. Keeping track of all of these interfaces is going to get tricky as games will need to keep in mind there will be only one pad per console and a myriad of other interfaces to program for and integrate in gameplay. Overall, I think the WiiU can hold it’s own, but won’t be converting anyone back to Nintendo on its merits alone. All the same, seeing what they did with it for games like ZombiU, Pikmin 3, Assassin’s Creed III, and Ninja Gaiden, I am hopeful that this won’t bankrupt Nintendo and they can gain some ground. Not a game changer for them, but it’s some legit tech…if you’re into motion-controlly kind of stuff. I’m not.

Winner for most iffy tech demo:
Windows Smart Glass
This is the oddest thing I saw at the expo…and I saw a half-naked woman holding a chainsaw. Smart glass is the idea of integration, which seemed to be a theme for the big three–Nintendo, Sony, and Microsoft. Smart Glass will take all of your interfaces you have now–tablets, XBOX, phone–and make them smoothly work together on everything from gameplay to richer experiences watching Netflix and other content.

Though it seems a bit odd, and I don’t know if I need all of this, I can see what Microsoft is trying to do here. They aren’t going to try to get you to buy something new, like a WiiU, they are instead going to create software to integrate all of your hardware in to one easy viewing and gaming microcosm. It is ambitious and a little genius while keeping with a Windows theme–it’s still got some bugs to work out.

Winner of most annoying/catchy demo:
Just Dance 4
We get it! It’s a dancing game! There were stations all over the expo, and you could not escape the music blaring from the speakers they cranked to 11. I heard everything from Rock Lobster to music by Nikki Minaj and Flo Rida to everything else pop and catchy. Everywhere were amateurs and hired dancers, sometimes in some flashy costumes, dancing their asses off and sweating like they’re late on an alimony payment. I found myself listening to 95.5 on the way home–and liking it. If I don’t hear another pop song for a month it will be too soon. Savvy marketing though, they even have me talking about it.

Biggest losers of the expo:
People who waited in line for trailers
There were plenty of lines at E3. This is a society that bases its civility on the adherence to the line, but there are just some lines that did not need to exist. I get that you’re excited about the game, but why wait in line for an hour to see a trailer or some gameplay that I guarantee will be released next month if not leaked already. I get that you’re excited for a game, I know I am stoked for a lot of what I saw, but the idea of wasting an hour or more to sit in a theater to see an extra few minutes of gameplay or trailer that I can’t even record anyway seems dumb. Seriously, who is going to read your description of the gameplay you saw? The written word is dead. Hell, who has read this thing to this point? No one has. I’m just typing to an empty chair. Wait in line for demo? Yes. Wait in line for video? No.

Biggest shock of E3 (no pun intended):
No BioShock Infinite
I’m livid. BioShock Infinite was nowhere to be found on the show floor. Not anywhere that I could get access to. I wasn’t the only one. I got tweets and read tweets about the absence of BioShock. It felt like throwing a birthday party for a friend and then her husband doesn’t show up. Kind of got to be there, man. Pretty shitty of you. Or that was a really good hiding job you did. Now I’ll hide and you count to 100, Ken.

Biggest (attention) whore of the party:
Halo 4
As you can imagine, Halo 4 was plastered on everything. You couldn’t walk 100-yards without seeing a 60-foot banner or a lit display, or a photo booth with a Master Chief statue, or a warthog personnel carrier, or something. Resident Evil 6 gets an honorable mention but Master Chief was the freakin’ E3 mascot this year. Not saying it’s a bad game, just saying that it was little much. Put your shirt back on college girl, we’ve seen ‘em already. 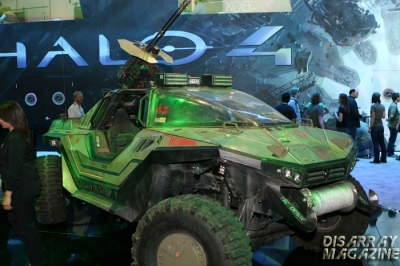 Worst decision of E3:
Eating anything and then standing in line for anything
E3 food is as terrible as I was led to believe. It’s not that its bad, well it is, but it’s that you’re gonna need to take a bacon-wrapped shit about an hour after a bacon-wrapped hot dog with the works. Abandoning your hour-long grind in a Borderlands 2 line when your colon comes up screaming for relief will be the worst feeling…until you get to the can. Note to self: pack a sack lunch next year.

Overall Winner of E3:
Microsoft
Whether it’s Halo 4, Smart Glass, GoW Judgment, or the improvements in Kinect capabilities and game integration, or the new media coming to the console, Microsoft comes out smelling faintly of roses after E3 2012 as a well-rounded console that will make a strong showing over the next year and a half. They aren’t all a basket of posies, they smell faintly of shit, too, but at least it wasn’t bacon-wrapped. Nintendo just behind Microsoft, and Sony, did you even try? I wasn’t feeling it.

Honorable Mention:
Ubisoft
This company has a strong lineup on the coming year. Assassin’s Creed 3, Far Cry 3, Just Dance 4, ZombiU, Watch Dogs, Rayman Legends, Splinter Cell Black List, and even Avengers Battle for Earth, among others, they are set to have monster year with a lineup of games that are going to win more than a couple E3 awards. Some of the demo booths were rewarded with a few ribbons and stickers for flair.

There you have it, our completely random winners and losers of E3 based on an arbitrary system that can’t be explained or understood.

Check out ProjectPoppycock.com for more in-depth coverage of E3 starting later this week.

I’ll leave you with a little bit of advice a Playstation banner gave me, which I think would serve us all well: Never Stop Playing. 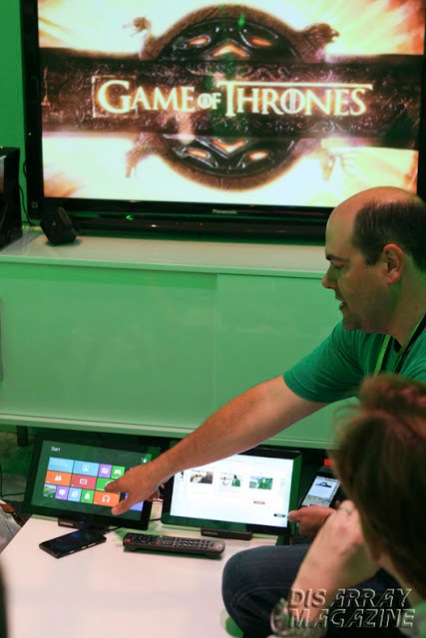 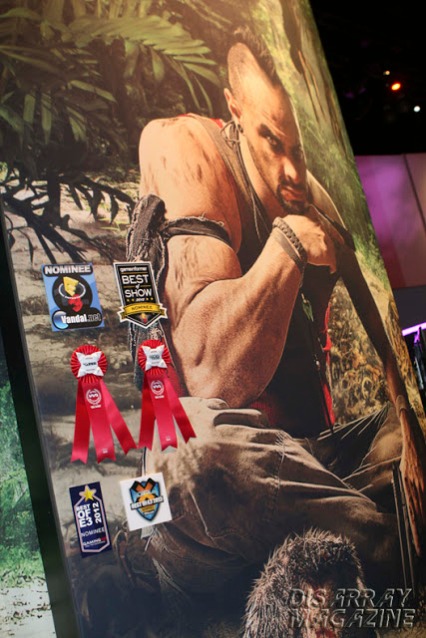 All photos by Wesley Bauman for Disarray Magazine
About the Author

Wesley Bauman is an editor/photojournalist in Ventura, CA. With a background in journalism, Wesley has expanded his scope of work and created Project: Poppycock, a digital experiment in collaborative writing and open dialogue. He is the author of two books, Doggy Paddling in the Deep End andWhat!? I Said, “With All Due Respect!” Both books are available through his blog, projectpoppycock.com (click on “The Bookstore”). All profits from the sales benefit charities atdonorschoose.org. Follow Wesley on Twitter @myownfalseidol