The Sleeping’s Interview Wrap Up

Doug and Chris of The Sleeping caught up with me on the last day of tour to talk about the band’s latest release and the upcoming holiday season along with the remaining plans they have set for this year leading straight into the New Year.
1. Introduce yourselves and tell me what you do in The Sleeping?
Doug: Hi I’m Douglas and I sing for The Sleeping.
Chris: Hi I’m Chris and I play the piano, keyboard and theremin.
2. How did you come up with the band name?
Doug: The Sleeping came from when we started the band I guess you would say it was an oath to people as a form of staying asleep when it comes to their dreams and not doing what they wanted to do. So we started The Sleeping to have those to be able to break out of that zombie state of mind no matter what they’re struggles may be.
Chris: Doug’s cute.
Doug: F**k yeah I am.
3. Today is the last day of tour, how was it? Get along with everybody?
Chris: Yeah great vibe on and off the road, texting each other every day.
Doug: It’s been a real cool vibe and has all become great friends and all of the dudes in Hollywood Undead have their logo on them and we have theirs on us. So it’s sad that this tour is over, because they’re our best friends and we’re going to miss them.
Chris: Tonight we plan to party. 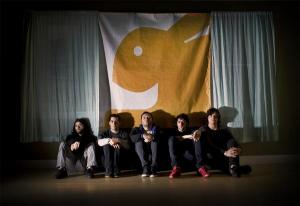 4. What can you say about your current album?
Doug: It’s called What It Takes and it’s our newest album with our newest members Paul our guitar player and Chris. It’s very hard rock album to listen too.
Chris: It’s very catchy and upbeat and it’s fun to listen to really loudly.
5. Have any favorites off it?
Doug: Chris what’s your favorite?
Chris: My favorite song would probably have to be the last song on it called “Dead Beat”. It was a fun song to write and has a lot of different elements to it.
Doug: I also like that one there’s so much to say about that song. “One Night Stand” which is about sexual relationships – I had written that song in Philly and we won’t discuss that happened there but I did write that, it was cool that’s one of my favorites and I also like “Shallow Lungs” and that’s about drugs and the bridge on it is cool reminds me of Stevie Wonder.
6. The holidays are coming up Thanksgiving and Christmas what do you hope to expect to be under your Christmas trees?
Doug: Well he and I don’t give a crap about Thanksgiving. I’m down for stuffed mushrooms though as for Christmas I really want a PS3, new jeans and shoes and more records for my player and my tattoo artist to come move in with me.
Doug: Hey come here (Calls friends over during interview) this is the clothing companies you have to get into whenever you see this bird you know that – that’s the clothes for you.
Doug: Alright Christmas back on track ready go!
Chris: I want a moped, and record player.
7. What can we expect from you guys for the remainder of this year leading into the New Year?
Doug: We’ll be writing as much as we can and then go and record everything.
Chris: Just tour and write some more and then go and record it once it’s all done.
8. Anything else you’d like to say?
Doug: Yes everyone out there in this world I love and believe in you and take care of those around to and wash daily and triumph over evil I’m Doug I have to run and I would like to tell you one more time believe in yourselves.
Chris: This comes from BOO-YA who are our black jack in Vegas who says Doug is Satan.
Chris: Peace out we’re The Sleeping have fun!
About the Author

Natalie Perez has been a Music/Entertainment Journalist for 7 years now having first started out with her middle and high school newspapers. She now writes for a handful of various online and print publications.