Helsinki Is Alive and Well – Let There Be Vampires: The 69 Eyes’ Los Angeles Return

When it comes to concerts, what occurrences tend to happen? Well, a set of opening bands perform and then there’s of course, the headliners of the entire evening who take the stage last and perform late into the night. Then, you have party goers who like to relax and share stories and drink to help them feel more at ease, whereas the more heavier crowd tend to take things to another level causing an eruption of energetic proportions known as “mosh pits” or “crowd surfing”, in this case a mosh pit made its way to the forsaken streets of Hollywood in front of the Key Club on Sunset Blvd.

But what is a “mosh pit” exactly?- Concert goers are no strangers to these two words. A mosh pit can be described as “The ultimate way to show your love for your loud, pounding music taste. Controlled violence. The thing about the Mosh Pit is NOONE will take offense at you whacking them in the face…,” according to Urbandictionary.com 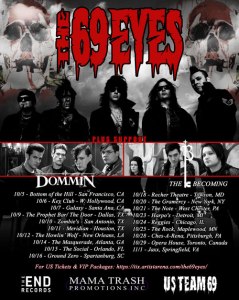 The 69 Eyes, performed for a solid hour and a half set that consisted of the new, old, and ancient tracks taking them back to when they first broke out into the music scene including, “Brandon Lee,” “Gothic Girl,” “Feel Berlin,” Devils,” and more newer hits “Dead and Gone,” “Dead Girls Are Easy,” and most favorite “Lost Boys,” just to name a few.

The 69 Eyes’ “rock show” definitely delivered mosh pits. When the band instructed audience members to “rock out,” I did just that and my oh my, did I have the best time – minus the little complaints I received, but who cares it was worth it. I attended last night’s show which welcomed Helsinki Vampires to sunny but lately chilly California terrain.

Taking their Finland inspirations and blowing it totally out of hand – Bam Margera took the stage and caused chaos. Margera got up, said some words then walked off as the band returned to the stage and rocked out two more tunes before calling it a night. When it was all said and done, the moon outside told what was to become of that night and it was the night the Vampires had returned from the dead. 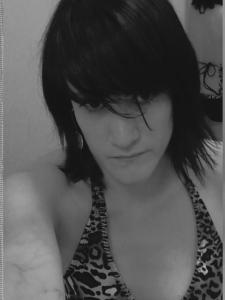 Natalie Perez has been a Music/Entertainment Journalist for 7 years now having first started out with her middle and high school newspapers. She now writes for a handful of various online and print publications. Her goal is to get her name out as much as possible until she becomes a well-known Music Journalist!