It’s been three years since Three Days Grace released the album One X, and the band has finally made their triumphant return with their third studio album titled, Life Starts Now. With previous musical installments, the band stuck to the mainstream rock albums that all “other” bands tried to create. However, when it boils down to Three Days Grace’s unique style and rhythm, the band always kicks it up a notch by adding their own flare to each album they dish out. 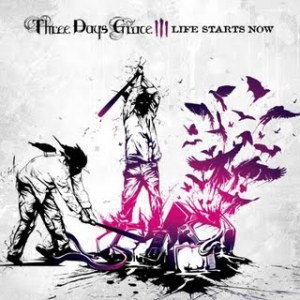 The band’s first self-titled album in 2004 had a more edger tone to it, pushing out an aggressive tone of rhythm that the band was focusing on at the time. When the sophomore album shot through, One X (2006), a more modern rock attitude was displayed, which took Three Days Grace down a whole different path showcasing a more mature sound. Now that the past is said and done, Life Starts Now is upon us and a repeating texture has shot up.

This album goes down the lines of sounding exactly like its previous counter-part adding a list of 12-tracks to fall back on – exhibiting simple sound effects of break-down solo attempts with overpowering riffs and repeating chorus lines that just lack the emotion and energy the band once formatted. Songs like “Break,” Bully,” and “Goin Down,” aside from the so-called balled type tune “Last to Know,” sound a lot like “Never Too Late.” The selections of songs that come at you throughout the album just don’t cut it for the listener at times.

The music picks up on certain aspects during these selected tunes but just doesn’t maintain that energy that these guys once had within their grasps and let slip away. The music is more modern and takes millions of miles away from their older roots never letting the past break back through.

Natalie Perez has been a Music/Entertainment Journalist for 7 years. She now writes for a handful of various online and print publications.