With the departure of Jimmy Chamberlain, the Smashing Pumpkins have added a new drummer to their lineup, 19-year-old Mike Byrne. Hailing from Portland, OR, the drummer flew out to Los Angeles for an audition, impressing founding member Billy Corgan.

Corgan explains why Bryne stood out from the other drummers, “Through the open audition process, I was astounded by how many great drummers there were that wanted the chance to try out for The Pumpkins. We counted over 1,000 submissions, and what made Mike stand out was he just seemed to have that X-factor that all the great drummers have, a stunning blend of power, speed, and grace. I’m excited to work with him moving forward–he truly deserves this opportunity. I believe in my heart he will push me to be a better musician.” 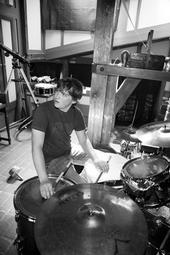 Landing the gig of his dreams, Byrne expressed his own enthusiasm. “I’m super excited to be playing with the band,” says Byrne. “Dream come true, man.”

Not many 19-year-olds can say that they’ll be on tour with the Smashing Pumpkins as well as on their next album.

Getting into the band was anything but a typical audition. “We didn’t actually play songs at the audition,” says Byrne. “We just kind of jammed for about 15 minutes and then talked about Fugazi for the other 15 or so minutes.”

So what musical influences inspired Byrne while growing up? He lists Mogwai, Maserati, and Maps and Atlases as well as the Pumpkins.

You can catch Corgan and Byrne at six solo SoCal shows:

For those wondering what happened to Jimmy Chaberlain, he told Greg Kot at the Chicago Tribune in March 09:

“By now you have heard the news of my departure from the Smashing Pumpkins. I will say, without going into any unnecessary details that this represents a positive move forward for me. I can no longer commit all of my energy into something that I don’t fully possess. I won’t pretend I’m into something I’m not. I won’t do it to myself, you the fan, or my former partner. I can’t just, “Cash the check” so to speak. Music is my life. It is sacred. It deserves the highest commitment at every level and the Pumpkins are certainly no different. I’m sorry but it really IS that simple. There is no drama, bad blood, or anything else but a full commitment to music. My best goes out to Billy and I’m glad he has chosen to continue under the name. It is his right. I will continue to make music with the Jimmy Chamberlin Complex as well as pursuing other musical interests. I feel that I have a long way to go and a lot to give. Thanks to everyone for your kind words and support through all of this. I am constantly humbled by all of you! It is an honor and a privilege to play music for a living and I don’t take it for granted not even for a second.”

For those looking to see if Byrne has what it takes, watch this drum off footage from 2008: 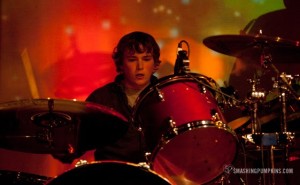