We recently caught up with actor Eric Henry and discussed his latest projects, how he entered the entertainment industry, advice he has for aspiring SAG-AFTRA members as well as lessons he’s learned from the industry so far. Keep reading to learn where you can catch him next.
Tell us a little bit about yourself and your latest projects.
I am a geek-chic goofball that is currently obsessed with storytelling. I’ve been frequenting Moth Radio’s Story Slam events where people have five minutes to tell a story based on the theme of the night. I am fascinated with what makes a compelling story and am blown away with how people thrive through such incredible traumas and dramas. As for work, I’ve had a bit of commercial success and have several projects about to air on TV. One of my latest projects, “Defined Bi” addresses issues around bisexuality in a committed relationship. It was my first romantic lead in a film, and I look forward to seeing it make its rounds through the festival circuit this coming season.
How did you find yourself working in the entertainment industry? Was it a dream of yours since you were little or did you fall into it after moving to Los Angeles?
When I was little, I loved playing pretend and feeling like a bigwig… I dreamt I was best friends with Macaulay Culkin and told my classmates I was in the next big Addams Family movie.
I didn’t get into acting professionally until after high school and only began my on-camera acting career once I moved to L.A. two years ago.
I know you mentioned you were also a puppeteer. Can you tell us a little more about how you got into it and some of the work you’ve done?
I was actually living in Hawaii when this came into my life. Several people suggested I get in touch with a theater company on the island, and when I contacted them, they invited me to become a puppeteer touring the Hawaiian islands with short puppet musicals for children. It was an incredible, serendipitous experience!
This past year, I was fortunate enough to get back into puppeteering for Saddleback Kids in a web series called, “Tales From the Wildwood Treehouse.” 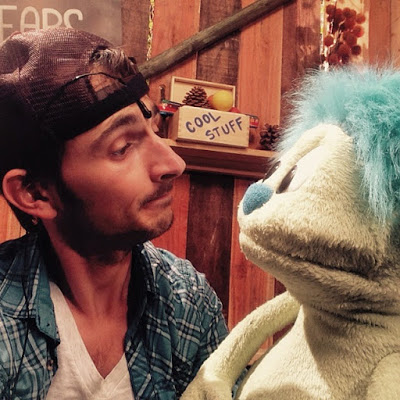 Is there anyone you’d like to thank for helping you get to where you are today?
Though I can thank enemies just as well as friends for helping me get to where I currently am, it’s the support and wisdom of friends that have helped keep me grounded, balanced, and feeling so loved.
What inspires you?
Great Art! Whether it be storytelling, dancing, MUSIC, witnessing the way people express themselves, great acting performances, nature.
Who are your influences and who do you admire?
My Auntie Ruth, before she passed, left a huge mark on me for her generosity of spirit and her love of inspirational quotes. It’s probably why I’m the guy who’s always reading at least one book from the “Live Your Best Life” section at the bookstore.
I really admire anyone I meet and learn about that has created a magical way about their life, people whose success is more holistic – not just based on material achievements but achievements in mental fortitude, emotional honesty, and spiritual connection.
What lessons have you learned from the entertainment industry so far?
Just when you think you know the rules, they change. I used to think I understood the secrets to booking work and staying busy, but it’s just not that simple. Staying optimistic and hopeful is great, but staying connected to who you really are, to where you are, to what you’re really feeling each moment, is even more important.
If you could collaborate with anybody, who would it be?
I’d love to work alongside emotionally transparent actors like Eddie Redmayne and Logan Lerman, and I’d LOVE to collaborate with creators and writers of television shows like, “Transparent,” and “The Fosters,” where they are addressing current social issues in meaningful ways.
What is the toughest experience you’ve had to overcome and what lessons did you learn from it?
I’d say my toughest experience is an ongoing one – the battle against my mind. I have learned I am a creature of comfort, like many of us are, and having a career that rests and relies on uncertainty and dynamic change makes my mind go bonkers trying to control what it never can. I am learning that I am happiest and feel the most fulfilled when I keep pushing through the fear of uncertainty and trusting in a larger plan.
What is the best piece of advice someone has given you?
“I am enough.” A simple reminder that you are the solution – that who you are right now is enough for the job you’re going in for – is the peace of mind I needed to do the work asked of me and let the rest go.
What advice would you give to aspiring SAG-AFTRA members starting out in the industry?
Keep checking in with yourself every step of the way. You need to keep striking a fine balance between listening to all the advice everyone has to give you and listening to your own gut.
Where can we expect to see you next?
Later this month, catch me opposite of Andrew Daly in Episode 208 of Comedy Central’s, “Review.”
And in 2016, I have bit parts coming out in films, “Liza, Liza, Skies are Grey,” directed by two-time Academy Award winner Terry Sanders, “House Cat,” directed by Robert Logevall and starring Rhys Wakefield, as well as a co-star on HBO’s, “Togetherness.”
Let our readers know where they can find more information about you and your projects.
Sure! Twitter: @erichenry83
Instagram: _e_love_
Website: www.eric-henry.com

When she’s not running Disarray, she’s consulting for Tigerlily Consultants, helping businesses with their content marketing and social media strategies.
y is responsible for the editorial strategy of DisarrayMAG.