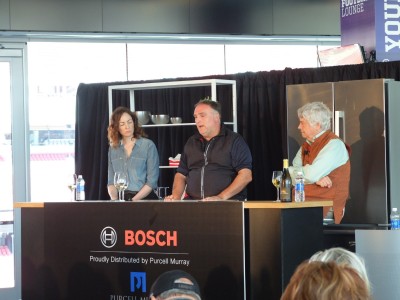 A triple lock zip lock bag can be used by farmers in the Global South to save crops for well over a year until such time as it might be sold to make more profit. The city of Los Angeles spends $12 million dollars a year feeding the elderly. Loco’l is trying to take on the grip of fast food on the food deserts of places like Watts and the Tenderloin. These were some of the key insights of the first ever Silicon Valley Bite conference, a conference meant to focus on the intersection of food and technology.  The event took place at Santa Clara’s Levi’s Stadium, the new home of the 49ers.
Yet, it was also about food here are some of the key savory bites:
Bourbon Steak Tartare

Bourbon Steakhouse started by Egyptian Born Michael Mina, has a location at Levi’s Stadium. Maybe it was home field advantage but, Bourbon offered this Steak Tartare dish sometimes spelled (Steak Tartar), which was maybe the best protein on offer at the event. Steak Tartare, despite being just raw meat and spices, can be difficult to cook at home. Besides, it’s doubtful that the black truffle, cured egg yolk and black garlic emulsion were perfect garnishes for this dish.
Another dish enjoying home field advantage was this braised short rib slider was enhanced by Jicama Apple Slaw, Goose Island Dijon all under the pretzel for a bun.  Served on game days by Centerplate. 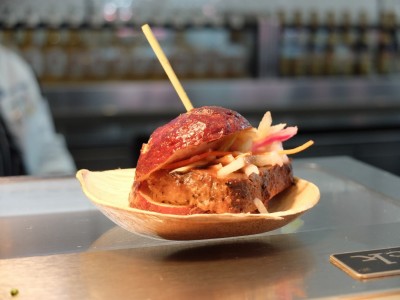 Also at the event, outside celebrity Chef Jose Andres offered some gourmet vegetable tacos. One was a cheese and corn combination the other featured seaweed, beans, and red salsa.

The conference also offered demonstrations on the future of 3D printing on food, which at present time largely means 3D printed candies. Yet, it also means you can do things like:

For more information, visit: http://bitesv.com/
About the Author

Joseph Hammond is a freelance journalist who has been published in California, Estonia, Egypt, and Jordan. He enjoys learning languages and is pretty good at table football. He’s a big fan of boxing, the Los Angeles Dodgers, and FC Barçelona. He is currently based in Prague, Czech Republic.