BLACKSTORY has a simple individual dramatic structure, ticking towards its fatal conclusion but developed over split-screens for each character. When watching Lucille, Silvester, Gabriel, Maximilian and Fred dig their own grave, we see them simultaneously in up to 5 split screens – a formal expression of the precisely interwoven stories. These carefully balanced compositions in picture and sound required some time in the making. We worked for 5-years on this film. It was a hell of a trip! But the movie is fun, you have to see it!

The number of people connected to this project requires some digits… We never forget the limitless hours, days and nights spent by our Production Team, our Actors, our Producer Karin Berger and, later, the incredible amount of work put together by our VFX compositors and our Sound Designers. Certainly, the Vienna Filmakademie deserves a special mention for having made it possible for so many talents to meet, work together and produce such a project like BLACKSTORY.

How does it feel to have your film part of the NewFilmmakers Screening at Sunset Gower Studios?

The city of Los Angeles and the Studios represents in the mind of every film-maker a milestone and a special place to be, on your path to true professional achievement. Being selected by NewFilmmakers LA and being given the chance to screen in such setting fills us with pride and enthusiasm, and a little nervousness: will the audience enjoy our work?

Images, movement, colour, characters, entangling stories: the experience in everyday life are the true inspirations to tell stories, create worlds and make our characters play within them. Every film-maker has some kind of library from where he picks up inspiring ideas: we guess that nothing can be more inspiring than the journey of life. 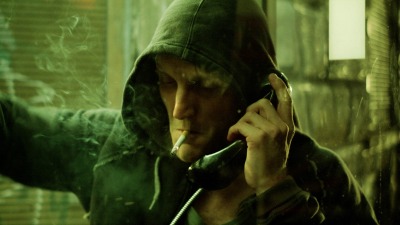 Several directors have inspired us in the past. We could mention names like Lars Von Trier, Wim Wenders, David Lynch, Gus Van Sant, Akira Kurosawa, Quentin Tarantino, but other than being in great company, we would just end up mentioning the greatest names of cinema. What inspires us is their unique visual taste and ability to tell stories in unconventional ways creating outstanding characters immersed in surreal imagery. With Blackstory we aimed at creating such experience, playing with the darker tones of comedy and romance, on a night to remember in which a group of curious characters cross each other’s path.

At each single step, no matter how hard it is to make it, we learned something. Ambitious ideas require effort and energy and a great amount of time to be achieved. Even the most talented film-makers did not become successful overnight. A good director requires experience not only in fim-making, but first of all in life, before he can move on to direct outstanding professionals into making great stories.

We would be very happy one day to be able to work with a creative screenwriter like Peter Morgan or Jonathan Nolan or a producer like Jerry Bruckheimer. But, of course, having the honour to work with Rachel Weisz or Leonardo di Caprio in the main cast of a movie, would make our sleepless nights pass by quicker! Never give up dreaming:)

Did we ever mention how much Blackstory costed us? No, well, maybe it’s better if we do not… ok, let’s put it this way: did you ever meet a film-maker, to date, who never had financial problems, at least for once in his starting professional life…?

Mmmh… as writers and directors, we tend to live in our own world, you know… so we usually are hard to convince and stubborn as well, still… we would say that our producer did sometimes give us good advices that we obviously never followed. Another young producer friend of us, working now on the promotion of Blackstory, once told us: “Whatever you can’t pay for today, there’s no reason why you should be able to pay for tomorrow. So, stick with what you have now, and forget about tomorrow!”

Don’t even start it! No, really, being a filmmaker is a hard job. You need talent, patience, luck… especially in finding (or being able to select) along your way, the right people who may build constructively with you. This requires a long process, a great deal of constance, commitment and determination. It is true, after all, that nothing which is worth having in this world, comes easy.

Viennale, Berlinale, Cannes… as tourists of course. We like travelling and if a Festival happens on the way we might as well take out our black tie from the trolley  We are now working on a number of new projects, but these will take some time in development. For now we can surely say that BLACKSTORY will be travelling at international film festivals and that you will see it next in Rio De Janeiro (Curta Cinema), Zinebi Bilbao (Spain), Camerimage (Poland) and Cucalorus Film Festival (Wilmington), before the end of 2012. After Los Angeles of course, where we will screen this month our American Premiere. Hope some of you will be there!

For now, you can certainly enjoy Blackstory’s official trailer on http://www.blackstory.at. For the future, google our name and we hope to be somewhere in the first pages 

It’s a great pleasure to be here. It’s a true honour for us to have the possibility to screen our work ahead of such an audience. Even if the viewers do not know from the beginning, the five characters in the movie recognize too late that they are swallowed up point-blank by the plot, literally disappearing within it. We hope first of all that they will not disappear like our characters, and also that they will enjoy watching this crazy movie as much as we enjoyed the trip along the way, spent making it. Have fun!

For more information, visit: http://www.newfilmmakersla.com/
About the Author