The Torrance Crossroads shopping center is filled with many shops and eateries. There’s one section of the shopping center that is a strip of many Asian cuisines including Japanese and Thai to name a few. I learned that Royal Thai had a lunch special so I decided to check it out. 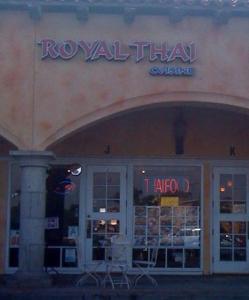 Upon first glance, the color scheme of the restaurant created a mellow atmosphere. I was greeted and seated right away. The host, who doubled as the server brought me my menu a few moments later along with a glass of water. She did not introduce herself or ask me if I would like anything else to drink.

As she walked away, I perused the menu. There were over 10 dishes on the lunch special that started at $5.99 with your choice of Chicken, Tofu, Shrimp, and Beef. From your usual staple of Pad Thai and other noodle dishes, to rice & curry dishes, the menu covered them all. Included in the price was a soup, and if your dish did not consist of noodles, a side of noodles as well. 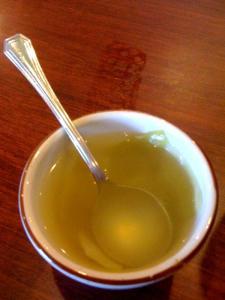 I ordered the Noodle Supreme: Stir fried flat noodles with egg, bean sprouts, and scallions, with a small salad. As I waited for my food, I noticed that a lot of carry out orders were being placed and picked up as well. Furthermore, the server, the sole one on the floor, sometimes could not keep up with the mere four tables in the dining area.

Shortly after I placed my order, the server brought a small broth consisting on cabbage and celery. Tasty and light, it hit the spot as I waited for my entrée.

My entree arrived within ten minutes of ordering. My first impression was for the price I was paying, it certainly was a good portion that encompassed almost the entire plate. The taste was nice, a bit peppery but not too overwhelming. The noodles were al dente and not greasy either. The salad was a bit small to be considered one but it was alright, I could have done without it. 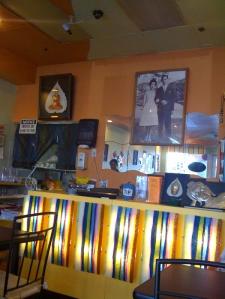 I cleared the entire plate in one sitting; it was truly a tasty dish. I was ready for the check but the server had headed into the kitchen for a little while. When she returned to the floor, I told her I was ready. She brought me the check and settled the payment shortly after. 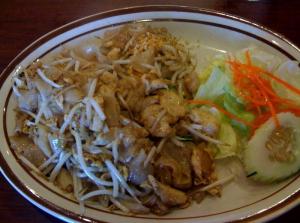 All in all the meal was very tasty. It was a great portion for a great price. It does not get any better than that. There are many choices on the lunch menu to choose from. If it’s your first time or fiftieth time eating Thai food, rest assured you will find something to satisfy your hunger. However, I would order carryout as the service was a bit on the slow side at times.

Royal Thai accepts cash and credit cards as payment. It is also located in a large strip mall with plenty of parking. However, it is close to a number of businesses and tends to get crowded between the hours of 12-2pm. Royal Thai is located at 24631 Crenshaw Blvd #J Torrance, CA 90505.