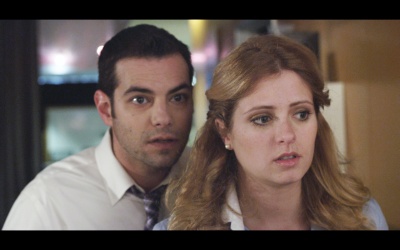 How many people dislike their corporate 9-5 jobs? How many people have actually made a short film about it? The answer to both questions is: Eric Eppinger. Learn about filmmaker Eppinger of the film A Night at the Office as his film is being showcased at the AT&T Center in downtown Los Angeles.

A Night at the Office is a short film about the dangers of working your life away at a job that you don’t enjoy. I used to work at an office in a corporate setting and that is where the idea for the film came from. I had been working on a script for a feature film but wanted to make a short first, I started the script for this film in 2011, we shot it in the beginning of 2012, it had its premiere at DC Shorts in 2012 and played at Cinequest this year.

There are so many people I need to thank, first off my producer Roberta Munroe and co-producer Rob Rippberger. I sent Roberta, aka “the queen of short films” my script after attending a seminar she gave, and she liked the script and wanted to produce it. After that we were able to assemble a highly talented cast and crew who made it all happen. Also have to thank Jamie Elman and Cameron Goodman, they are both incredibly talented and funny and without their performances the film would never have worked.

How does it feel to have your film part of the NewFilmmakers Screening at the AT&T Center?

It’s exciting, the whole experience with this film has wildly exceeded my expectations, it’s a quirky little movie that not everyone is going to get, but so far it has been really well received.

I think I am inspired by the absurdity that can be found in normal mundane situations.

I first became interested in filmmaking by watching many of the indie films of the 90’s from people like Kevin Smith, Ed Burns and Tarantino of course. I also really like TV shows with humor from real life events like The Office with Ricky Gervais and Curb your Enthusiasm. I was also a big fan of the X-Files when it was on so I think that is where my sci-fi leanings come from. 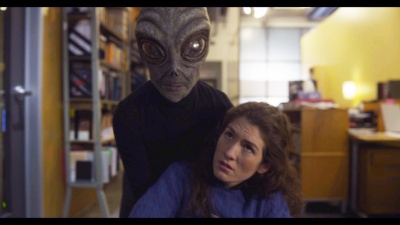 I think that is up to you to create opportunities for yourself. There are lots of challenges when starting out but if you continue to put out good stuff. Sooner or later someone will notice.

There are so many people but if I had to pick one I would have to say Woody Allen.

I can’t say there has been one specific experience, I think the most difficult thing to overcome when starting out is to be persistent and keep working towards your goal, there are many distractions in life that pull you away but you have to make time and work on your story a little every day.

To trust your instincts, you know the story you are trying to tell better than anyone else.

I think the most important thing is to have an interesting story to tell, even if you don’t have lots of experience behind you, if you have a good story you will be able to attract talented people who will be able to help you make your vision a reality. Also when you are starting out it is good to surround yourself with people who know a lot more about filmmaking than you do and trust them to do their jobs.

I hope to screen my film at some other festivals this summer and into the fall, I’m currently finishing up a script for a feature film that I hope to shoot in the near future.

Support independent film, events like NewFilmmakers Los Angeles are great in that you get a chance to see really good work you may not have been able to see otherwise and if you see something you like be sure to tell everyone you know about it.

For more information, visit: http://www.newfilmmakersla.com/
About the Author