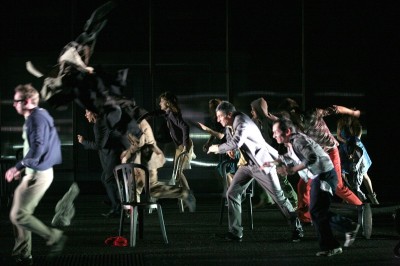 Rhinos charged through UCLA’s Royce Hall this past weekend. The venue hosted two showings of Eugène Ionesco 1959 play Rhinoceros performed by the Parisian based company, Théâtre de Paris . The event kicked off a new cultural events series, part of re-branded Center for the Art of Performance at UCLA. The new leader for the center, Kristy Edmunds stood infront of the stage before the start of opening night to introduce the new season.

Ionesco’s work is supposed to be a condemnation of totalitarianism with occasional comic touches. Yet, there are two important challenges any production of this important Eugène Ionesco (1909-1994) play must overcome to hold a successful production. The first is one of striking the right tone. Ionesco’s work is part of the, “Theatre of the Absurd,” movement and any theater company must be able to capture the right mix of humor and darkness the play requires.

The second challenge in the stage is a technical one how does a production company create the tons of Rhinos(so to speak) the work asks for? In most works, the Rhinos of the play, appear largely off stage or in the shadows. In this production by Théâtre de Paris, beautifully detailed Rhino heads linger in the shadows in some scenes. If encountered in a zoo, rhinos can seem lethargic; the ones in stage seem absolutely terrifying. A creepy soundtrack doesn’t hurt either.

The play’s main character is Berenger, who works in a publishing house in a French village. Our protagonist is a heavy drinker. His drinking contributes to his sloppy appearance and tardiness from his work.  He is a dissident by chance e to a movement which is turning his fellow citizens into rhinos, literally.   In one of the more dramatic scenes of the play, Berenger’s far more intellectual and successful friend “Jean” turns into a rhino despite his book smarts. One is reminded that intellectualism and resistance to totalitarianism do not necessarily go hand-in-hand. During the Korean War, American POWs subjected to Communist interrogation would often cave into their captors divulging “secrets” and “denouncing” America.  Counter intuitively, the less education and status of a soldier the more likely he was to hold out in face of ever more brutal interrogation. Regardless, the transformation of Jean into a Rhino, is one of the tougher performances an actor can be asked to accomplish. Stage veteran Hugues Quester’s who plays Jean”gives all he can in a scene in which he transitions from man into megafauna.  Berenger robbed of his friend, struggles on and the play eventually ends with him facing the world alone. 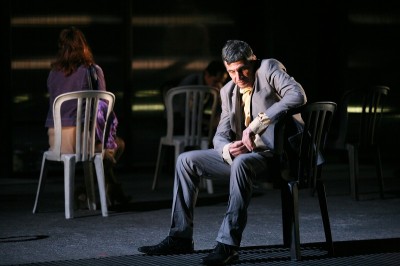 Ionesco had totalitarianism in mind but, there are no demagogues leading people here, there is only the slow spread of an ugly idea and the suppression of morality at an individual level. Both intellectuals and the common folk can be seduced by totalitarianism. Thus, Ionesco places the individual at the heart of the struggle against fascism in its many forms. Thus is a play with very libertarian undertones.

Ionesco personally witnessed the rise of Fascism in Romania 1930s, an oil rich state which sided with Hitler in the Second World War.  Ioneso, like the fictional “Berenger” briefly worked as the proof reader of a publisher of law books. Before switching careers and becoming a playwright and author. Rhinoceros was originally a short story which Ionesco remolded as a three act play.

The tour will continue with tour dates in what Kristy Edmunds dubbed “smart cities” including Berkeley at Cal Performances on September 27, 28, and 29 (matinee), and in Ann Arbor at University Musical Society (UMS) on October 11, 12, and 13. The play is performed in French with helpful supertitles in English.
http://www.scpr.org/events/2012/09/21/theatre-de-la-ville-paris-rhinoceros-eugene-ionesc/ 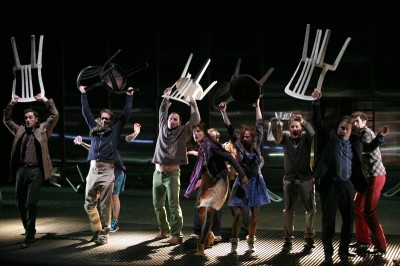 The opening night is also the beginning of an ambitious schedule for the Center for the Art of Performance in the coming months. UCLA will host a wide range dance, music,  theater events in the coming months which appeal to wider range of tastes.  Upcoming events will range broadly from the Los Angeles Chamber Orchestra to Middle Eastern vibes of Yemen Blues at Royce Hall. Finally, Rhinoceros will not be the only pachyderm themed theater offering this season. An intriguing play titled Ganesh Versus the Third Reich will appear on Jan 24, 2013 at the Freud Playhouse.

Joseph Hammond is a freelance journalist who has been published in California, Estonia, Egypt, and Jordan. He enjoys learning languages and is pretty good at table football. He’s a big fan of boxing, the Los Angeles Dodgers, and FC Barçelona.