Filmmakers Spotlight: Interview with Director Ella Hatamian of "The Epiphany" 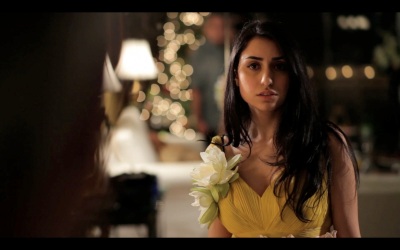 We recently caught up with Armenian Director Ella Hatamian to discuss her film, The Ephiphany, which is currently being screened at Sunset Gower Studios as part of NewFilmmakers Los Angeles. Learn about Hatamian’s project, her learnings and influences.

The Epiphany was my undergraduate thesis film at NYU. I had the idea two summers ago when I was on vacation with my family, I thought it would be fun to make a movie with them. Most of my films take place around a social event – over a short, specific period of time. Armenian Christmas was only a couple months away so I decided that would be the central setting of the film. I wrote the script in September and shot the film in January and it took me way too long to edit.

Everyone who made the production possible – my family, my producers, my crew, all the friends (and strangers) who donated on Kickstarter, my teachers Susan Seidelman and Nick Tanis.

How does it feel to have your film part of the NewFilmmakers Screening at Sunset Gower Studios?

Awesome. I’ve never seen it on the big screen. My favorite part of making a movie is watching an audience watch the film – it’s completely nerve-wracking but I live for it. I’m excited to be a part of such a well-curated showcase.

Enthusiasm. It’s not easy to cultivate so I’m always inspired by people who maintain enthusiasm for what they do.

Blake Edwards, Woody Allen, Rainer Fassbinder, and Sidney Lumet are some of the most influential storytellers in my book. Tennessee Williams and William Saroyan are my favorite playwrights. I admire Busby Berkeley for his commitment to spectacle, and Albert Einstein for his ability to articulate some of the most intricate and complex ideas to the point of understanding; for me, achieving clarity is the greatest challenge of filmmaking. I admire my parents for always having faith and confidence in my pursuits (that have never been the kind ensure steady income or dental benefits). I mean, I admire all the people who take me seriously…

That it’s changing. There’s been a revolution in everything from medium to distribution and filmmakers don’t have to be at the mercy of a studio to tell a story. I’ve learned to take advantage of that.

I feel silly answering this question because I’m only 23, have always had a roof over my head, food in my stomach, an incredible education, family, and friends. One time I had an ulcer, but I took medicine and it went away. Another time I broke my arm, but that got better too. I never had a “tough” experience – only incidents I dramatized for college applications.

Know what you like and what you don’t – taste is everything.

I’d like to act some more but auditions are too nerve-wracking for me and my nerves have no patience for any more wracking than I’m already subjected them to so I guess I’ll write myself a role. I’ll direct a feature soon, I plan on it being a comedy because I like to make people laugh. I only say “plan” because one time I made a dramatic film called “Going Out” and ironically, it won an award for “Best Comedy” so you never know… Or maybe you do. But I sure don’t.