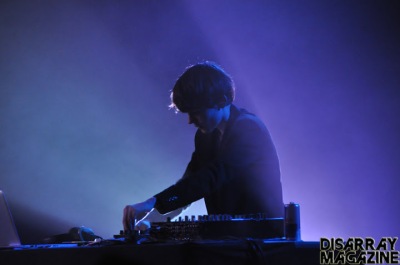 Good music can come from minors, right? If you were at the Roxy Theatre on the Sunset Strip to catch Madeon recently, then you already know the answer to that question. At 17-years-old, the pop/house producer from France, got the audience dancing their asses off at the sold-out show. Luckily for you, if you missed it we were there.

Who knew watching a dude onstage twisting knobs could be so entertaining? There’s something about a live show that enhances the auditory awesomeness of any music experience. Despite being surrounded by hyper teens jumping up and down screaming at the top of their lungs, the setting was fun and almost nostalgic. (Oh, to be 16 again watching punk bands at this venue).

In front of the stage, the audience showed off their fancy footwork while Madeon “rocked out” playing, “Icarus,” resembling a young David Guetta. He’d take sips of Redbull in between songs – cute, we thought. As much as we hate the word, “Swagger,” there’s no doubt that Madeon’s got it. A simple raise of his hand got the audience hyperventilating during, “Pop Culture.” He’d jump up during climatic parts of his songs and the crowd would go nuts.The lighting effects definitely helped amplify the experience.

A sea of iPhones and cameras could be seen recording Madeon’s remix of Yelle’s, “Que Veux Tu,” and Deadmau5’s “Raise Your Weapon,” at the Roxy Theatre show. We’ve got a hold of some footage that will transport you to the show. Check it out below. 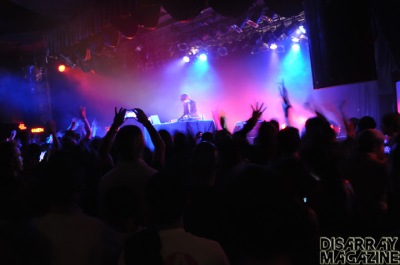 Check out our slide show for some of our favorite photos from the show:

(All photos by Markus Biegel)

https://picasaweb.google.com/s/c/bin/slideshow.swf
If you’ve never heard of Madeon, check out a few videos below courtesy of keiji805:

Here are some fun videos below featuring Nathan J. Barnatt:

Hopefully, we’ve turned you into a Madeon fan. The 17-year-old electronic prodigy is coming to a city near you! For more information about this artist, make sure to visit the following:

Formerly an editor at Demand Media, writer at Citysearch, The Examiner, LA Youth Newspaper and proofreader at The Los Angeles Daily News, Christy Buena decided to start Disarray Magazine because she missed writing what she wanted. From hiring writers, to contacting publicists and making assignments, Christy is responsible for the editorial strategy of Disarray Magazine. Get to know theteam of talented contributors.
Questions, comments or suggestions?
Contact Christy@disarraymagazine.com
Follow Twitter.com/ChristyBuena