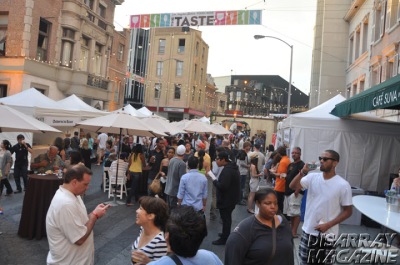 The Los Angeles Times | Food and Wine’s, “The Taste” event kicked off in various parts of L.A. including Beverly Hills, Hollywood and Downtown. The Labor Day weekend event featured four days, three locations and 9 events all consisting of various restaurants, wineries and breweries from all over southern California. Attendees spent $150 per location and enjoyed four hours of unlimited food and wine tastings.

The main difference between this year’s event and last year’s were the locations spread across the city and the lack of live musical entertainment. Our favorite location, however, was the Hollywood tastings held on the Paramount Studios back lot among the brown stone facades and NY streets. We watched live cooking demonstrations, tasted everything from vodka, tequila, red and white wines, along with a variety of foods.

Don’t worry. In case you missed out on the delicious event, we documented it for you.

We tasted Palate Food + Wine’s lamb flatbread pizza with pistachios and immediately went back for seconds. You know the food is great when the chef himself describes it as, “stoner food,” because it was without a doubt satisfying, flavorful and could definitely satisfy anybody’s “munchies.”

Our favorite cooking demonstration came from Fabio Viviani, who taught us how to cook pork bellly. Viviani’s tutorial was like stand-up comedy combined with your typical “how-to” cooking show. He told the audience, “A lot of you like to stare at the oven, sometimes opening it every few minutes. Do not do that. The pork belly doesn’t like it and is sensitive. Leave it alone for three hours at 345 degrees and go on with your life.”

Were there drinks? Oh yes. Copious amounts of alcohol ranging from Absolut Vodka, Coppola Wines, Hornitos Tequila, among others were available for attendees to take. We loved how all the vendors helped create a fun party vibe.

All photos by Markus Alexander

For more photos of Hollywood and Beverly Hills, see below:

We highly recommend you attend the next event as you get an unlimited amount of food and wine tastings. Also, kids are free with each ticket purchase!