When one thinks of Metal, there are a few individuals that immediately come to mind: Ozzy, Dio, Bruce Dickinson of Iron Maiden and of course, Rob Halford. Halford performed at the Wiltern Theater and did not disappoint the audience, which consisted of at least three generations of Metal fans. His powerful and distinct voice resonated tirelessly as he mesmerized the crowd with a vigorous 90-minute set of thundering metal.

The majority of the songs were from the Resurrection and the most recent Made of Metal albums as well as a couple of Judas Priest bonuses.

Halford took the stage with an intimidating and captivating presence, wearing sunglasses and a heavy leather coat with long fringes, claiming full command of the audience and proclaiming that heavy metal is the heavyweight champion in music. The Rob Halford performance was as good as Metal can get. The musicians obviously enjoyed what they were doing and were having a good time. While the two guitars, a bass and drums enthralled the audience with “Undisputed,” Rob stood aside watching his band mates with admiration. 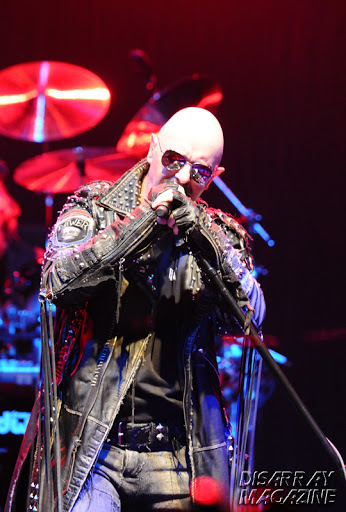 The daunting Metal God, as he is often called, was very engaged with his audience and even displayed a sense of humor. As Metal Mike turned the ending of “Golgotha” into a prolonged and a drawn-out solo, Rob and his band mates watched intently and then finally laughed while he indulged himself. Rob also shared with his fans that “I Don’t Care” reminds him of Chuck Berry, “I don’t know why, it just does. If you don’t know who he is, Wikipedia him.” Rob thanked all for coming out and affirmed that L.A. is still a very important place for rock and heavy metal. He closed the riveting and tireless set with “Savior.”

All photos by Nicole Lemberg

For more of Nicole’s photos and reviews, visit her site:
www.SoundCheck411.com