Last year one of my first pieces I reported on for Disarray Magazine was the first annual California Beer Festival. It was incredibly well patronized with many beers on tap from all over California, friendly people, and good music.

As with any festival’s first time out there were a couple of little issues that made the day slightly uncomfortable. The first issue was that the event seemed to be oversold with a line wrapping around the block and winding through town of people waiting to get in. The second issue was a lack of port-a-johns which made lines there longer than any line for beer; I don’t know what it is but beer seems to be the only beverage in the world that makes you need to pee more than you actually drank, go figure. This year, the festival organizers seem to be fixing those little problems and then ramping up the fun to be had.

At www.californiabeerfestival.com, you can find listings of what this year has in store for everyone willing to buy the ticket and take the ride. With tickets at just $40 dollars each they are flying out the door and will quickly sell out. This year there will be six bands on two separate stages doubling the good tunes that will float over the grassy park and those enjoying beer. Those in charge of the event have pin pointed one thing missing from a sunny afternoon with friends drinking beer; BBQ! This year at the festival will be a BBQ cook-off with prizes that I am assuming will allow people to taste some homemade cooking from recipes that those entering the contest might have under a literal lock and key.

So we’ve got more music, authentic BBQ, and a promise of more throne rooms for the physics defying brew. What about the beer? Oh don’t you worry folks, there is talk of more than 100 beers for tasting. That is one hundred beers that you can try from all over the state. Some of the things you might look for on the local tip? We’ve got entrants like Anacapa Brewery, which is on Main Street just blocks from the event; within stumbling distance. There is also Telegraph Brewing, Santa Barbara Brewing Company, Island Brewery from Carpinteria (a favorite of mine to visit). We’ve also got brews by Firestone, Wolf Creek, Leinenkugel’s from Wisconsin (toured that beautiful brewery myself), Lost Coast, Sierra Nevada (of course), and Karl Strauss Brewing, which makes the Windansea Hefeweizen, one that blew my mind last year.

They aren’t skimping on the beer, music, or food in the least, and at $40 it is a steal of an afternoon in Ventura. Are they just going to release you after without thought of safety? Not a chance. If you visit the festival’s website you will find that if you are coming from out of town and don’t want to be a DD on this kind of day you can get 1/2 price taxi rides from the event from Gold Coast Cabs, and for those of you coming up from LA or down from Santa Barbara and further then you can get specials on local hotel rooms if you feel like after partying at the local pubs and bars like Anacapa (which is where you’re gonna find me come 5pm) and sleeping it off in town before going home on Sunday.

This year it seems they have thought of everything and I for one cannot wait to go to the event. Last year not a single incident with two drunks, or cutting in line. All I found all day were passionate brewers ready and willing to talk beer and share their brew and love of good beer with you and anyone interested. I had an amazing time shooting, writing, and drinking my way from tent to tent in the grassy park. There were couches and loungers under the massive tree in the middle of the park for those trying to escape the heat and have a few laughs. My experience could not have been better last year with all the friends I made chatting about beer and waiting in line next to people who were all too willing to just talk and shake your hand. It was a day of good times and great beer which can only mean that the festival coming up September 18th in Ventura is only going to be better. This time around, organizers are keeping what worked last year, adding a BBQ cook-off, and of course more brews which is the point of the day; and more toilets.

Visit www.californiabeerfestival.com to buy tickets (THEY WILL SELL OUT SOON), get directions, parking, and more information on cab rides and motel deals to have both a fun and safe trip to sunny Ventura, Calif. 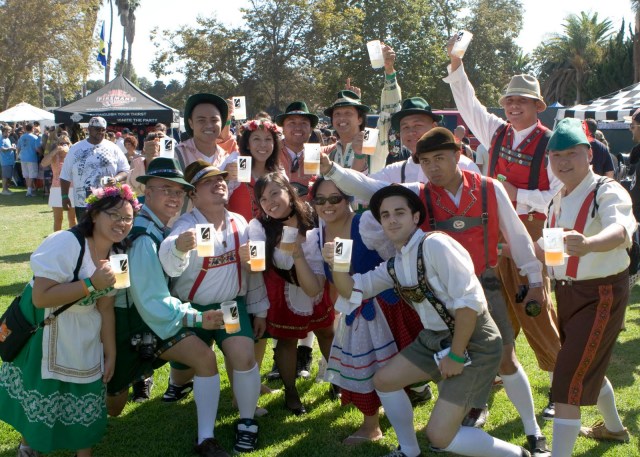 I’ve got my ticket and I had better see you there! You can also find me after at Anacapa Brewery working on my photos, article, and a handcrafted pint at the bar. Prost!

Wesley is a writer/photojournalist originally from Oregon who makes his home in Ventura, CA. He is currently a contributing photographer for the VCReporter and maintains an active blog (http://www.wesleybauman.wordpress.com/) where he writes on political and social satire regularly.