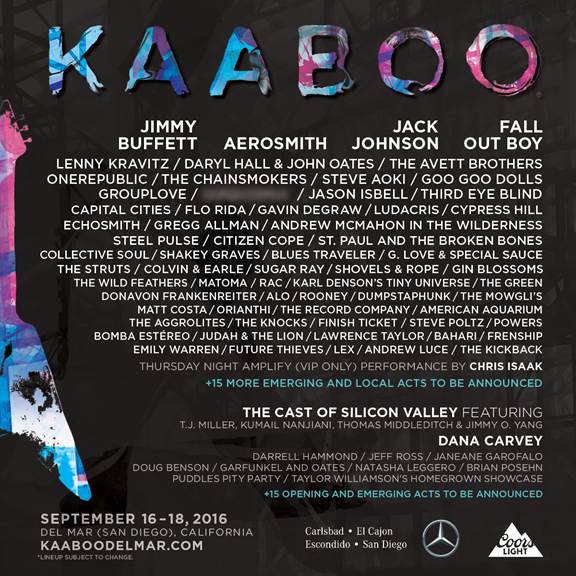 For those who want to keep the party going after dusk, KAABOO’s late night dance party, ENCORE has you covered. From 10:00pm-2:30am, attendees 18 and over can enter the expanded indoor, air-conditioned venue that will feature world-class bands and DJs, including The Chainsmokers, Steve Aoki, Ludacris, Matoma, RAC and Andrew Luce.

If you’re not familiar with KAABOO, it’s a three day event taking place along the shores of beautiful Del Mar, CA in September 2016. The upscale experience combines great live music, delicious food vendors, visually inspiring contemporary art exhibitions and your favorite comedians all in one place. As the perfect weekend escape, KAABOO is a cut above your average music event and you never have to worry about sacrificing comfort and luxury for an amazing experience.

In other exciting news, KAABOO and the City of Del Mar recently announced their agreement on a long term contract, keeping the three-day event at the Del Mar Racetrack & Fairgrounds for the next five years, with up to five one-year extensions after that. The contract was unanimously approved by the board and both Del Mar and KAABOO are excited to have a home for the “mix-perience of a lifetime” for years to come.