NewFilmmakers Los Angeles in partnership with LA Weekly and the LA Tourism & Convention Board invite film lovers to join them on October 20th, 2012 for this year’s On Location: The Los Angeles Video Project premiere event at the AT&T Center.

Film lovers get to celebrate and see how creative filmmakers highlight Los Angeles to the rest of the world when they premiere 22 short films centered on LA during a screening and after-party red carpet event! 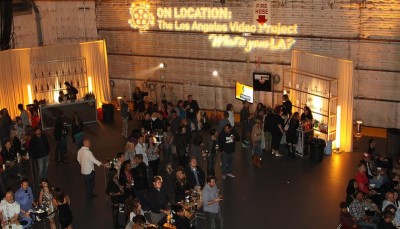 Joining in on the festivities, film fans can expect to see Producer Steven J. Wolfe of the hit film ‘500 Days of Summer’ and other special guests including LA City Councilmembers Paul Krekorian, Jan Perry and Tom LaBonge.

Attendees will have the opportunity to meet the directors of each film, the actors and other crew + participate in voting for the Audience Award!

All-Night Access passes are available for $20 online or $25 at the door. This includes admission, complimentary parking and open bar the entire evening. Make sure to purchase tickets in advance as they are expected to sell out!

Visit the On Location website at www.NFMLA.org/onlocation for more information and to purchase tickets!