DOOMTREE Brings an Epic Two-hour Rap Party to The Troubadour 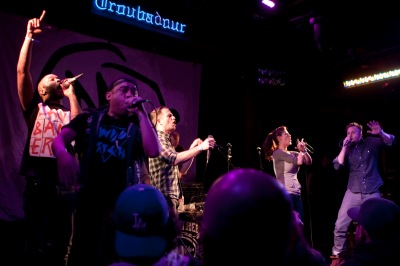 I’ve seen my share of Doomtree shows. I’ve had the chance to see these unique artists bring their own flavor to various tours, but before Thursday night at The Troubadour in L.A., I had never experienced the “two-hour rap party” that Dessa told me I was in for when we spoke just a month ago.

I have to say at least this about opener, 2 Mex: Anyone that has cassettes for sale at the merch booth and can totally kill a rap over a Weezer beat, has my vote. Check him out. 2 Mex. You’re welcome.

While last minute preparations are made on stage, as the house music bumps, and the tension builds, the bodies press in and any vacant space is filled with the low hum of vibrating fandom. Accompanied by the customary whoops and screams, Lazerbeak starts off with ten solid minutes of beats, gripping the crowd’s attention with an amazingly beautiful auditory tour of his new album Lavabangers before being joined by the rest of Doomtree: Dessa, Paper Tiger, SIMS, POS, Mike Mictlan, Cecil Otter. Just like that. There’s no parade, no randomized opener and headliners, it’s just five emcees and Paper Tiger joining Lazerbeak to begin a tag team set of everything Doomtree.

It was my first time seeing Mike Mictlan and Cecil, but I know all their music well. We even got a couple unreleased tracks from upcoming albums (like POS performing “Fuck Your Shit,” off a new album coming this year. Oh my God, what a track). As the night flew by, there wasn’t one track I didn’t get to hear for which I had been superstitiously crossing fingers. Each emcee played a track or two off a solo work, whether it was Mike and Dessa, or POS and SIMS, or Cecil and SIMS, or just a solo track like the haunting “Rebel Yellow,” of Cecil or “OMG” from Mike Mictlan, and my favorite in POS performing “Purexed.” Everyone got their time between blowing the roof off of the place with Doomtree collaborative tracks. Not a single thing was missing. We got to see the entire “No Kings,” album performed for us and then another hour of songs on top of that. All this for $13! 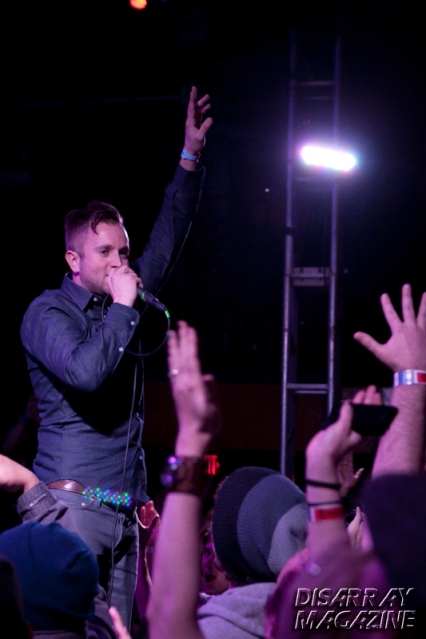 It is a sight to see everyone playing off one another, seemingly drawing energy from the rapper next to them and transferring energy via osmosis through bass vibrations, the crowd, which Doomtree took an exponential arc from intro to encore. Jumping, dancing, smiling, laughing, rapping in the crowd and seemingly goofing off at times, they had such an infectious energy that even the nerdiest white boys in the crowd (yours truly, included) had to loosen up and give in to the music. 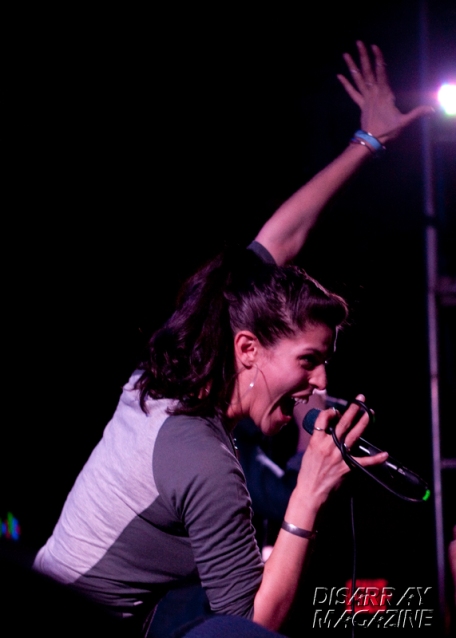 There is something about the love and family of Doomtree that makes for such a visceral connection. There is a deep and abiding love that permeates and comes paramount before and after the business and the work. It’s an undeniable devotion to supporting one another, and the long friendships and deep connection of ten years in their lane that makes it obvious. There is something so genuine between Doomtree members that you don’t see between most performers and road warriors. This truth and honesty in them as people, performers, and artists is what keeps Doomtree fans coming out in droves and keeps them coming back. Going to a Doomtree show as a newb? You will be converted. There is no helping it.

There’s a detraction that might keep you from seeing a Doomtree show, if you’re ever so lucky to have them pass through a town within a three-hour drive (that’s how far I’d drive to see them): it’s the Hangover. The Doomtree Hangover is what I suffer from now, and might take weeks to get over. Seeing Doomtree live ruins their albums more than any other group I have seen in concert. This show was the worst hangover I’ve had to date. Listening to No Kings as I am as I write this, it just doesn’t hold a candle to what I saw at The Troubadour. It’s no tragedy, of course, a band performing beyond what a studio album can convey; but if you can suffer through the live show hangover, then you’d be remiss to skip this show for anything short of the big three–wedding, wake, birth (and most wakes are really over by the times doors open at a concert venue near you…just saying) They work hard, rep wings and teeth, and melt faces everywhere they go. What else can you say? DOOMTREE!!! (This will suffice)

https://picasaweb.google.com/s/c/bin/slideshow.swf
All photos by Wesley Bauman
More Like This from Wesley Bauman:

Wesley Bauman is an editor/photojournalist in Ventura, CA. With a background in journalism, Wesley has expanded his scope of work and created Project: Poppycock, a digital experiment in collaborative writing and open dialogue. He is the author of two books, Doggy Paddling in the Deep End and What!? I Said, “With All Due Respect!” Both books are available through his blog, projectpoppycock.com (click on “The Bookstore”). All profits from the sales benefit charities at donorschoose.org. Follow Wesley on Twitter @myownfalseidol