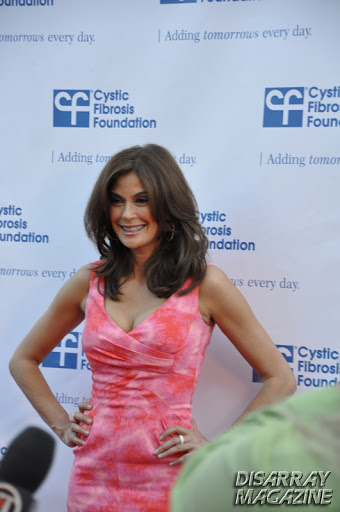 As soon as Band from TV began their set, attendees made their way to the front and got their video cameras and cell phones out to record the star-studded ensemble. It’s not too often, that you see a band comprised of actors from today’s hit shows including, “LOST,” “Heroes,” “ER,” Desperate Housewives,” “HOUSE,” among others.

Band from TV performed a string of cover songs consisting of classic rock favorites and even country tunes. Notable songs performed included, “Pink Cadillac” and “Before He Cheats.”

Pasdar was on the mic singing a great rendition of Mike Denver’s “The Day of My Return.”

Jorge Garcia, who plays Hurley on the TV show, “LOST,” performed the Blues Brothers’ hit, “She Caught the Katy.”

Teri Hatcher joined the band and performed a few cover songs, which included Carrie Underwood’s “Before He Cheats,” and Mary Chapin Carpenter’s “I Feel Lucky.”

Our favorite songs of the evening were performed by Scott Grimes who rocked on both “Don’t Stop Me Now” and “Walking in Memphis.”

Aside from the live entertainment, fans were able to enter the homes on Wisteria Lane.

Overall, the fun-filled event gave fans a sneak peek behind the scenes of “Desperate Housewives.” Live entertainment coupled with Stonefire Grill barbecue, unlimited ice cream and cocktails, beer and wine made for a great event, all for a good cause.